A key sidekick to any table saw is an outfeed table. Not only does it make using a table saw a bit safer, it's also another work surface in the shop with added storage possibilities underneath.

I started by measuring how big of an outfeed table I could reasonably fit in the shop. It turns out a 6' x 4' table would work well. 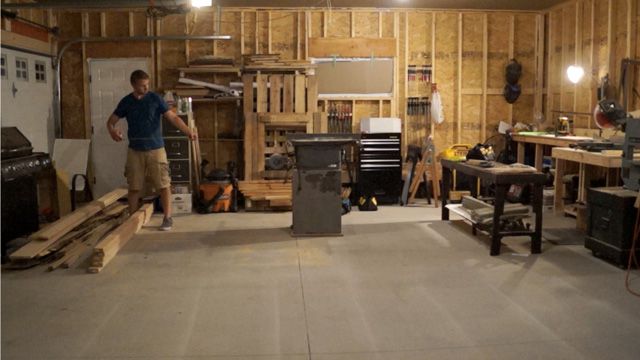 I began by cutting 2x4s down to size to make up the top and bottom frame of the outfeed table. 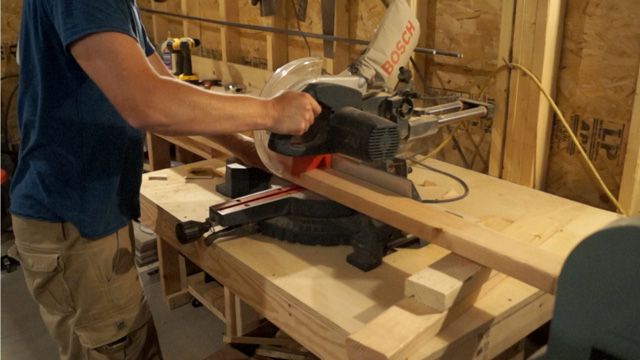 Once I had all the pieces cut to length, I could begin assembling them. I pre-drilled for each screw so the screws would be less likely to split the wood as I drove them in. 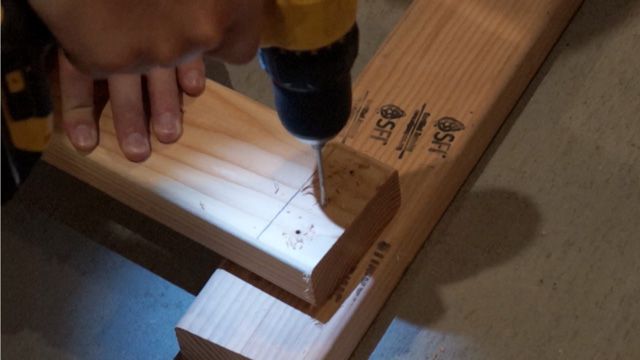 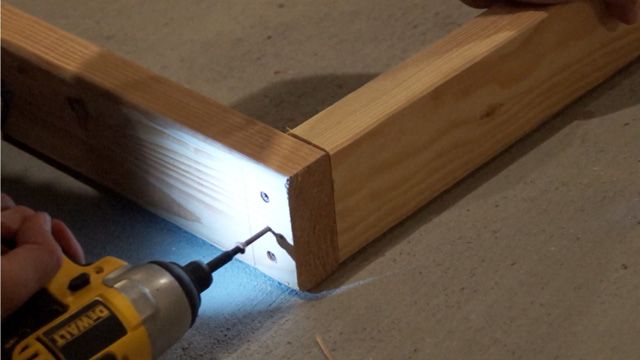 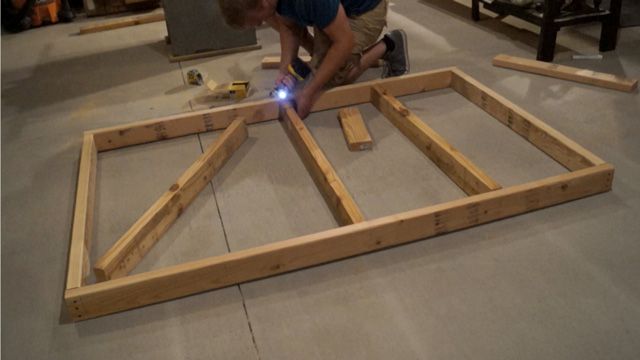 Now I have two frames exactly the same size. These will become the top and bottom surfaces of the table as mentioned above. 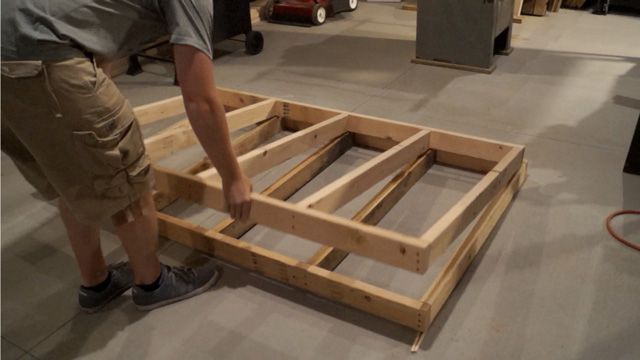 Next, I cut four wooden blocks to the same size and used them to prop the bottom frame up off the ground. 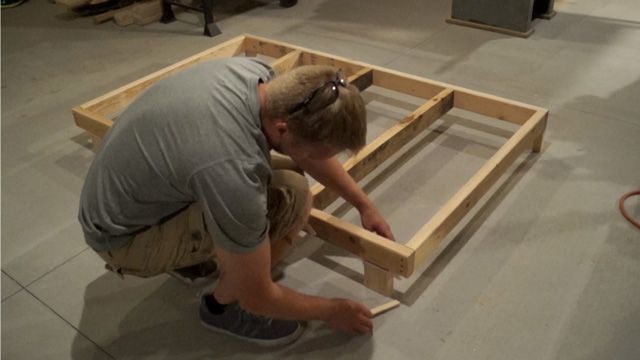 Then it was time to determine how long I needed to cut the legs. I measured from the ground to the table saw surface. Once I had that measurement, I needed to subtract for the plywood top (3/4") as well as another inch for some adjustability of the leveling feet. 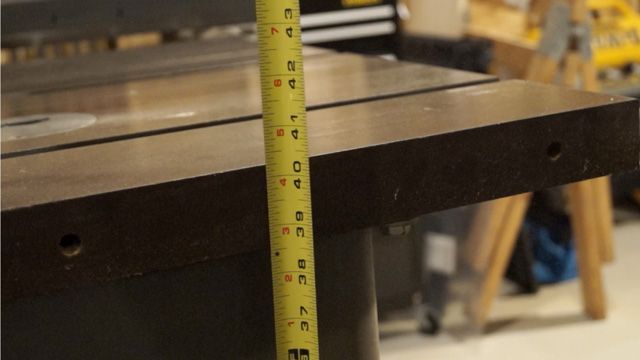 With the legs cut to length, I used a clamp to hold each leg in place while I used a level to make sure each leg was level. 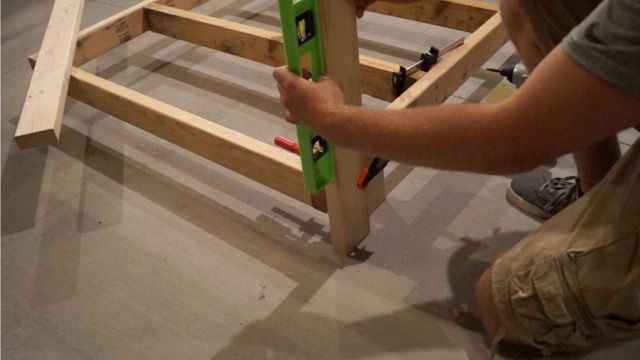 Then I pre-drilled and screwed the legs into the bottom frame. 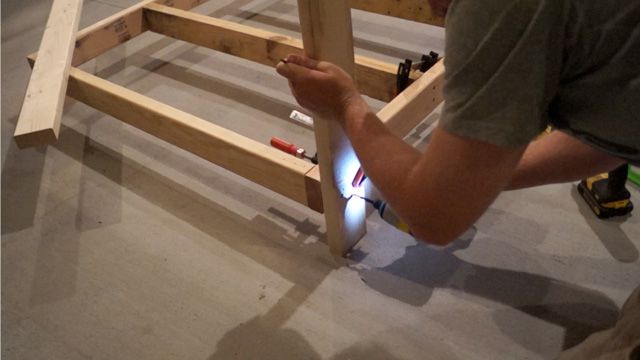 Then I took a riser block (from a previous step) and placed it underneath the bottom frame. I pre-drilled and screwed this into place. 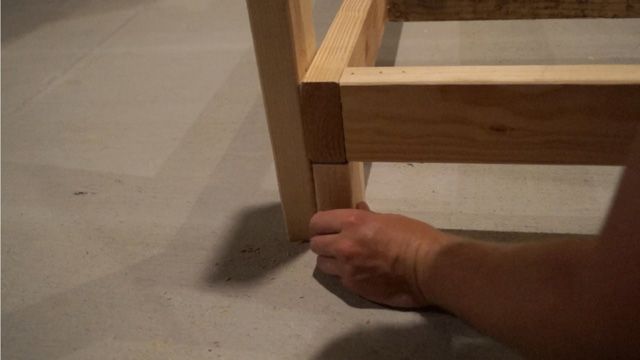 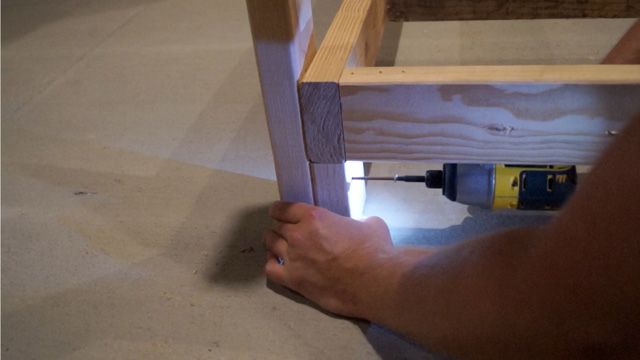 Next, for each leg, I cut another piece that would go from the top of the bottom frame to the bottom of the top frame (Scroll down, it will make more sense). This piece and the small spacer from the previous step allow any load or impact on the table surfaces to travel straight to the floor, instead of relying on the screws that hold the outside leg to each frame. I hope that makes sense. I attached this piece with glue and screws. 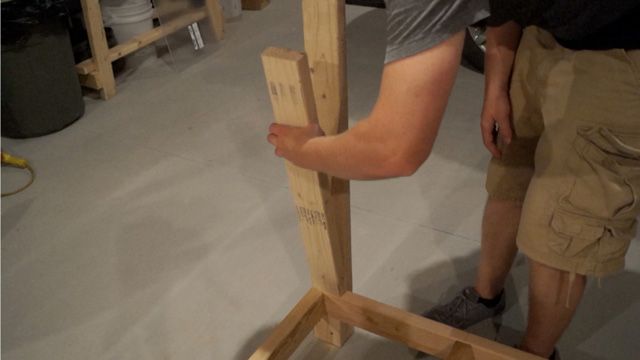 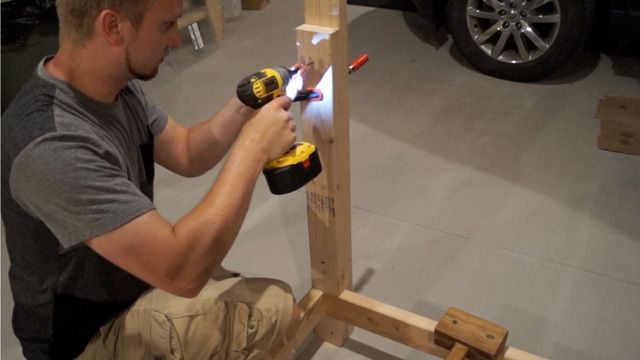 With the leg assemblies complete, I could lift the top frame into place. You can see how the top frame sits on top of the pieces I just cut and attached to the outside legs. 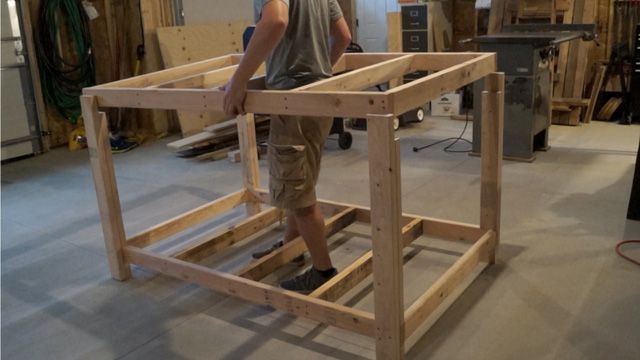 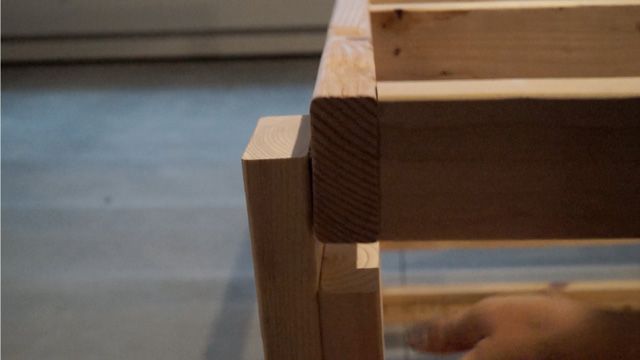 Next, I secured the top frame in place by pre-drilling and driving in screws from the outside. 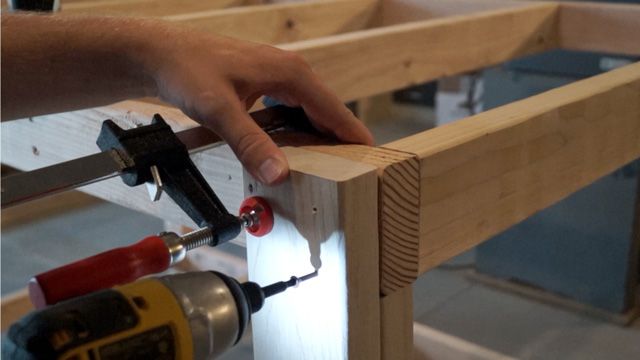 After the top was attached, I flipped the entire assembly on its side and attached the leveling feet to the bottom of each leg. 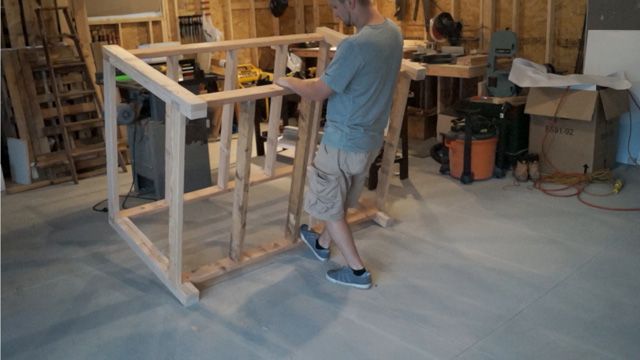 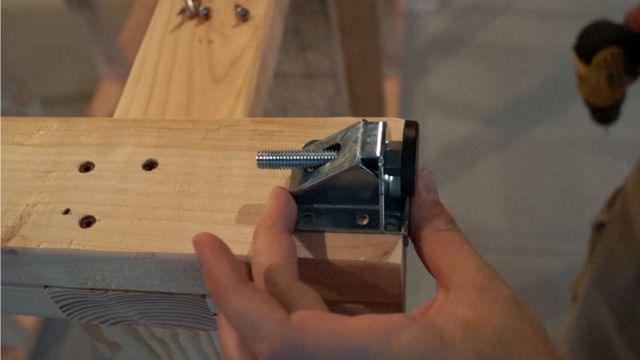 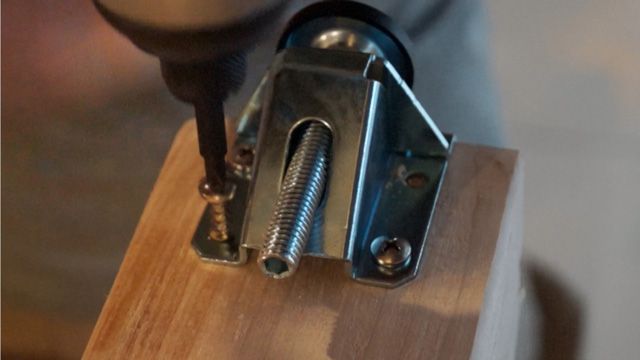 With the leveling feet attached, I moved the outfeed table into place. 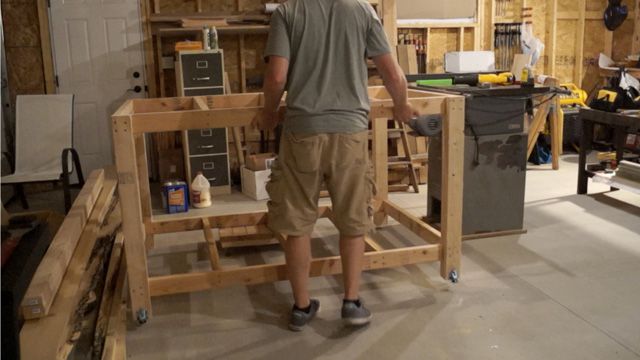 I then cut the top sheet of plywood to size and placed it on top of the outfeed table assembly. 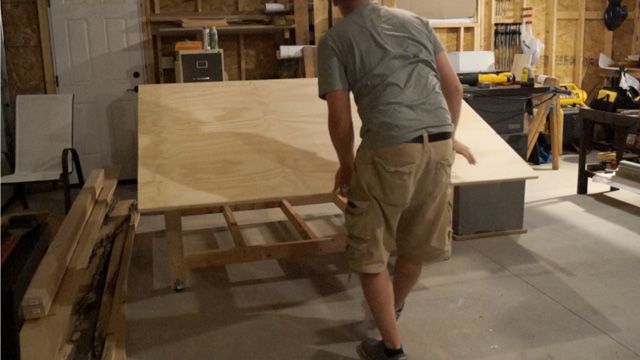 Next, I adjusted the leveling feet so that the outfeed table sat just below the surface of my table saw. 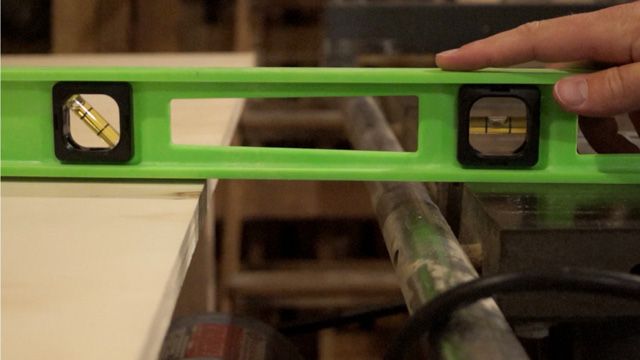 With the outfeed table at the correct height, I attached the top surface to the rest of the assembly using screws. I wanted the screws to sit flush with the surface, so I pre-drilled and countersunk for each screw. 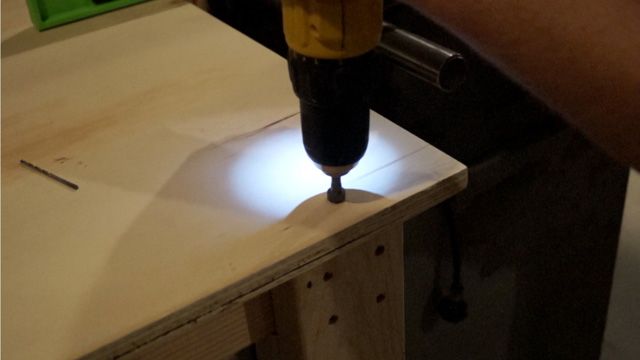 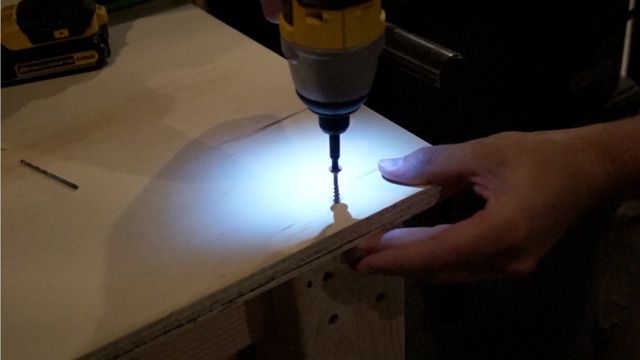 For now, this is a very usable outfeed table. In the future, I plan to build out the area underneath with a bunch of storage drawers and shelving. I hope you enjoyed this build! 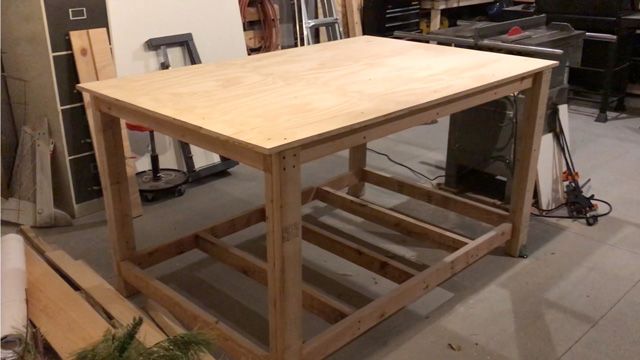 Want to built this outfeed table yourself?